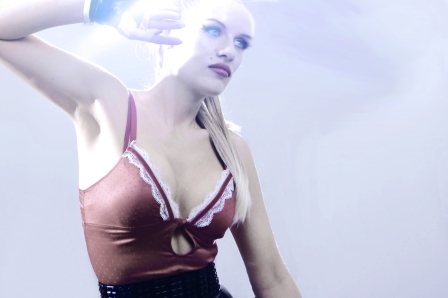 Bored after penning and performing two mainstream hits for Warner Music (charting top 10/20 in national video/radio), DOLLS moved from Toronto, Canada to London, UK and relaunched her music career as an independent artist, releasing the self-produced SECRET SULK in January, 2013. She later released the single ‘Limited LTD’ on Valentine’s Day, 2014, which she promoted with a series of anti-Valentine’s Day cards, and followed up in October of the same year to release the dark, Twin Peaks themed video for ‘Pedestal,’ to celebrate the 25 year anniversary of the hit show.

in 2015 she released the electropop single “Just stop” and album “EAT IT UP” as a collaboration with London dance producer Fauxplay, with the lead single earning acclaim across the internet on commercial radio.

DOLLS’ inimitable style has enchanted international artists of all descriptions (Salman Rushdie is a fan and Rough Trade‘s Carole Pope described SECRET SULK as “The Best Album Ever”) and she is, as ever, terribly sought after but difficult to pin down.