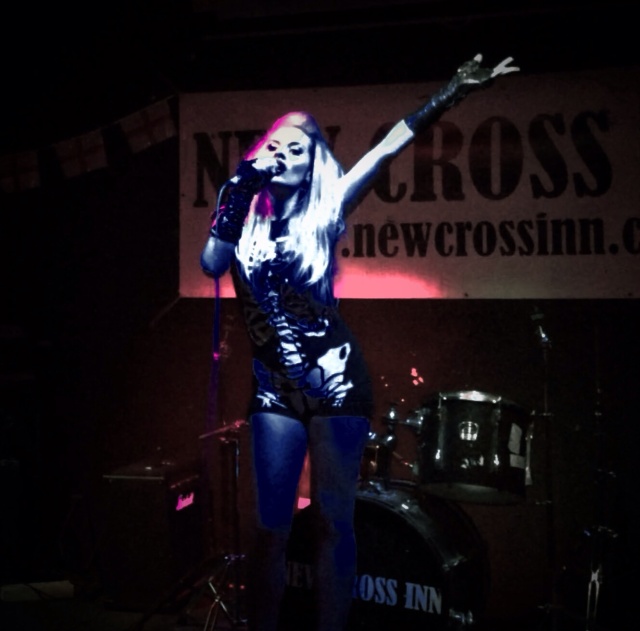 Fresh from Saturday’s gig at the New Cross Inn I have mega-goss for you, chicklets.

Firstly, the bands on the bill were severely wicked, so it would be hideous of me not to mention their talented asses – Zara (who brought me down to the park Gary Numan style), Intellegentsia (um, hi, remember that opera diva sequence from The Fifth Element? Filter it through Ghost in The Shell and have it come out over loudspeakers in a dystopian future) and 2KM2 (all you ever wanted to be, even if your drummer couldn’t make the gig. Fuck it, they’re sickening anyway).

A couple more firsts as well; although I have had fans try and pull me offstage before, I have never yet had one try and pull off STEALING the stage, nor have I ever scolded one with “get off my stage, NOW,’ which, for the universe’s viewing pleasure, has been recorded after the live debut of ‘Pedestal.’  I performed a cover of The Cure’s ‘Just Like Heaven’ and I have nehvah done a cover before.  Also, I have never dressed as an accidental sex Klingon, which is incredibly thrilling in pictures, but even I’ll admit it’s not as great as being there, I can’t lie.  Why are you punishing yourself and not attending the live shows? Do you live in a bubble? (I can relate & accommodate accordingly). If not, fly to London, already.  Or contact your local electronic music promoter and be thoroughly outraged that they have not yet booked me.

I’ve also added performances of Limited Ltd and a track off the upcoming EP (did you just wet yourself?) called Friendly Fire, to the gallery, which for your convenience is located HERE and will be added to when new pics come in.  If you have pics of the show use the CONTACT page (I know – but it’s an emergency), to get them up on the site, or contact me through DOLLS’ Facebook Page.

And now, because it’s been so hyped up, watch me look aghast at someone attempting to breach the circle of fabulousness: 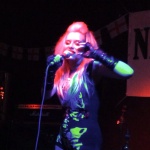